Symington Family Estates (SFE) is one of the principal Port producers and is the leading vineyard owner in the Douro Valley with a total area of 1,006 hectares (2,486 acres) of vines spread across 27 Quintas dotted around the Douro’s three sub regions (BaixoCorgo, CimaCorgo and Douro Superior) in what is the world’s largest mountain vineyard. Portugal’s geographic isolation, as well as some past conservatism on the part of its wine producers has worked in the country’s favor in terms of the preservation of the rich genetic diversity of its indigenous grape varieties. The demonstration site, Quinta do Ataíde, is located in Douro Superior and it has in total 85 ha vineyards. It consists of two plots with the variety TourigaNacional, and one plot with Touriga Franca. Although Ataíde has a fairly homogeneous, flat terrain, sandy-loam and loam soil composition, uneven soil drainage has been identified to result in some variance in grape quality.

Climate: The Douro enjoys its own micro-climate, which is an important reason for the quality and style of its wines. The most important geological features responsible for this are several mountain ranges sheltering it from the Atlantic Ocean influence, giving it a continental climate, with hot and dry summers and cooler and wetter winters. Average annual temperatures range from 11.8 to 16.5º C. Rainfall ranges throughout the year from 50.6 mm in the wettest month down to 6.9 mm during the driest month. 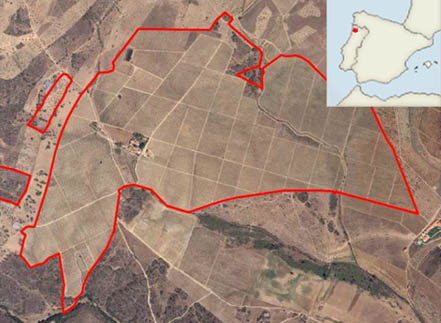